Fort McDowell Yavapai Nation is located in Arizona’s Maricopa County about 20 miles from Phoenix and minutes from Scottsdale. The Sonoran Desert landscape is enhanced by the flowing Verde River and the iconic Four Peaks to the east, which rises to more than 7,000 feet.

Created by Executive Order on September 15, 1903, the 40-square-mile reservation represents a small parcel of the vast desert lowlands and mountainous Mogollon Rim country that once made up the ancestral hunting and gathering lands of the nomadic Yavapai people.  Now, the community is home to 600 members with another 300 living outside the reservation.

In more recent years, Fort McDowell made history by reaffirming its tribal sovereignty. In the early 1970s, construction of the Orme Dam was proposed at the confluence of the Verde and Salt rivers, a short distance from the reservation’s southern border. The project would have flooded the reservation and forced the community from what was left of its ancestral homeland. With limited financial resources, individuals from the community spearheaded an opposition movement that rallied the support of fellow tribal members. Other Native American tribes and like-minded groups also opposed the dam.

By referendum in 1976, the community members voted 144 to 57 against selling their land to the federal government to build the dam. Then, on November 12, 1981, after consulting with the Fort McDowell Tribal Council and the Governor’s Advisory Committee, Interior Secretary James Watt announced that Orme Dam project would not move forward. Each year, a tribal fair and rodeo is held to commemorate the event.

During the early 1990s, the several tribal casinos, including Fort McDowell, were in operation in Arizona. In accordance with the provisions of the federal 1988 Indian Gaming Regulatory Act, the tribes were waiting to sign gaming compacts with the state government. At the time, however, the governor opposed Indian gaming and called upon the U.S. Attorney’s Office for support. Unannounced raids by FBI agents on five Indian casinos were ordered. At first light on May 12, 1992, the agents raided the Fort McDowell casino seizing the community’s 349 gaming machines and loading them into moving trucks. Community members witnessing the invasion took immediate action. They called other community members, tribal leaders and the media. Using every available car, truck, and piece of heavy machinery, a blockade of the casino’s access road was organized. A very volatile three-week standoff ensued between tribe and government until the Arizona governor ultimately was persuaded to sign a gaming compact with the tribe thereby paving the way for Indian gaming in Arizona. May 12 is now a tribal holiday.

The reservation is governed by a Tribal Council elected by tribal members pursuant to the Tribe’s Constitution. The Fort McDowell Yavapai Nation takes pride in its economic development and the expansion of direct services to meet the changing needs of all tribal members while at the same time preserving traditional values. 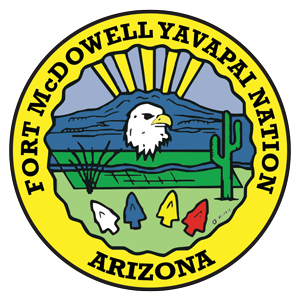