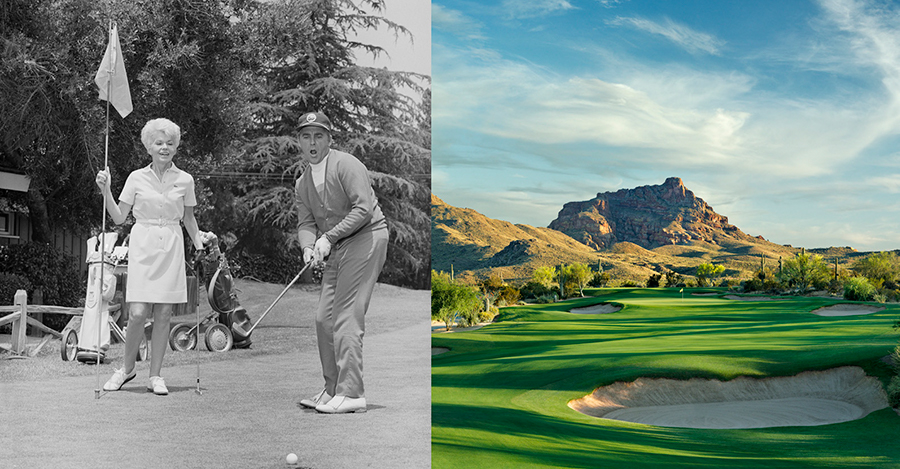 A Brief History of Golf in the Valley of the Sun

In the decades immediately following World War I, the Phoenix area was a little more than a pass-through town on the way to California. The summers were scorching and air conditioning was a luxury that would not be fully integrated in homes and businesses for another 20 years. The loop freeways synonymous with Valley travel weren’t even a glimmer in the eyes of taxpayers or governors. And the television boom that captivated the nuclear family was three decades away. So what did Valley residents do for fun in the Valley before all the hustle and bustle? In short, Roosevelt’s fireside chats and golf.

Golf was very different during the early days of Arizona statehood. Courses were almost exclusively private or available only to resort guests, again, passing through the Valley on their way to the beach. Sand greens dominated the golf landscape, as water – one of the desert’s most precious resources – was expensive, hard to come by and even harder to control through irrigation and hydraulic pumps. Players wore baggy, Palm-Beach slacks, dress shirts, ties, overcoats and wool hats. They hit clubs with peculiar names like spoon, cleek, niblick, mashie and brassie – far from the numbered irons we’re used to today. But arguably the biggest difference was the amount of courses. There weren’t many.

That changed in the 1950s, as post-war American affluence supplied the Phoenix area with an abundance of new resources. Electronics companies flocked to the Sonoran Desert to mass produce air conditioners. Engineers came by truckloads to help with the construction additions to Sky Harbor International Airport, and President Eisenhower’s interstate highway system allowed thousands of new visitors to flock to the Valley. Today, we call them snowbirds. Suddenly, the barriers that kept Americans away from the desert had disappeared, and they all wanted to play golf. The newfound prosperity funded dozens of new golf courses throughout the Valley. The cattle ranches of Scottsdale operating since the mid-19th century were transformed into country clubs, and the unincorporated town of Paradise Valley became an unstoppable tourism engine, flooding the area with world-class resorts. As a result, golf in the Valley of the Sun enjoyed a boom that would last for a half-century.

Similarly, the dot-com boom of the late 90s and early 2000s did its part to grow the game of golf in Phoenix and Scottsdale, consequently producing scores of new golf courses and one of the finest golf facilities anywhere in the southwest – We-Ko-Pa Golf Club.

While the game of golf, how it’s played, where it’s played and what players wear while they play has changed dramatically over the past century, one thing is certain: golf is here to stay in the Valley of the Sun.