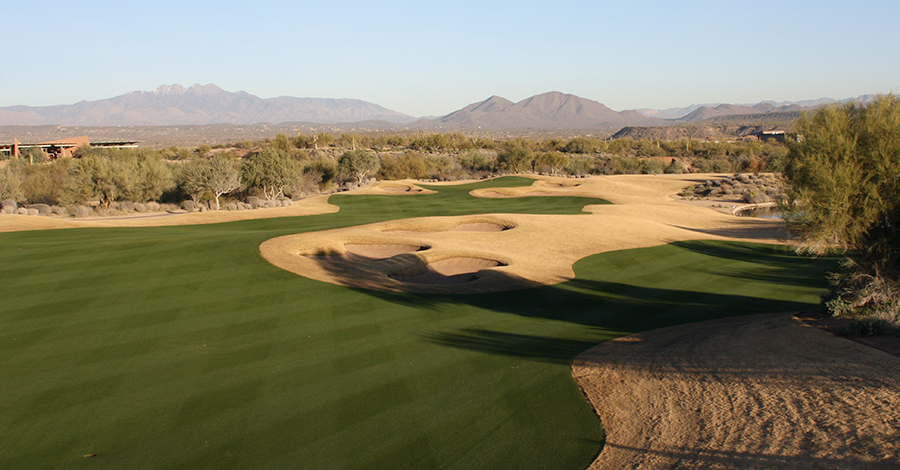 Mild winter temperatures draw visitors to the Valley of the Sun in droves. And thanks to the hard work of the golf course maintenance team, a green blanket of ryegrass is waiting for them.

In the deserts of the Southwest, as well as other Southern regions, bermudagrass goes dormant as the nighttime temperatures dip below 50 degrees. Almost overnight, the turf turns brown and to the uninformed eye, looks dead. But like the hard-to-kill horror movie villain, it comes back with a vengeance the next summer. In the meantime, it’s not a very appealing surface for golf. 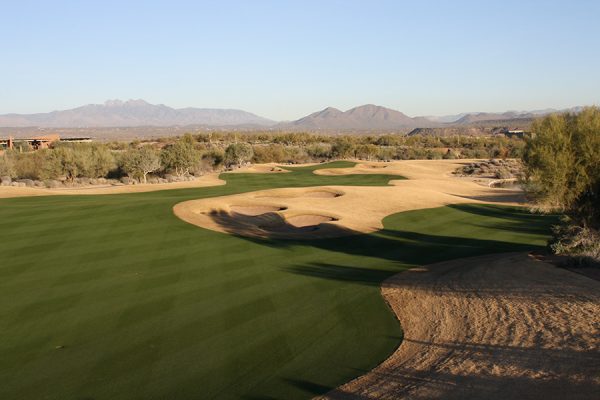 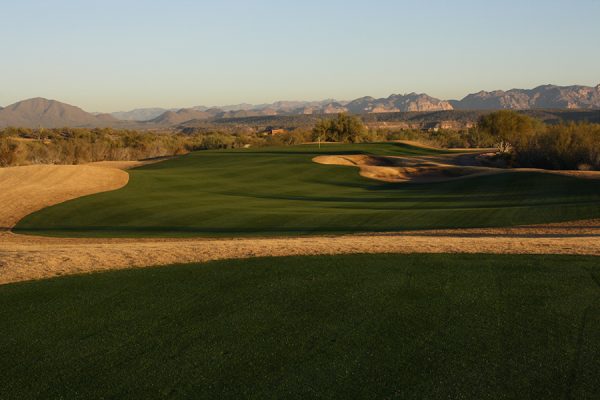 To create ideal wintertime conditions, the crew scalps the dormant grass down to the dirt and plants ryegrass over the top of it – hence the name “overseed.” The process is quite labor intensive, and the investment is a big line item on the budget. But once the grow-in is complete and fairways are groomed in a big-league-style checkerboard pattern, it’s well worth the effort. 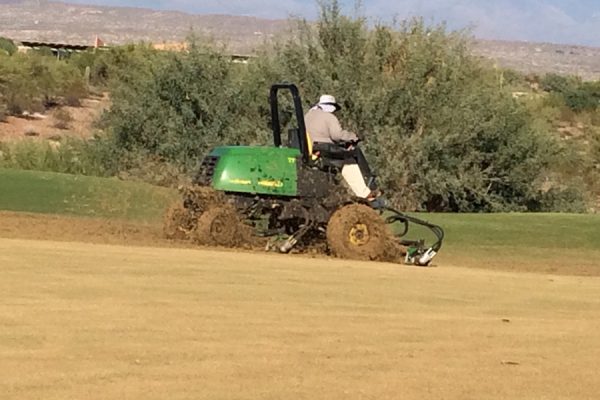 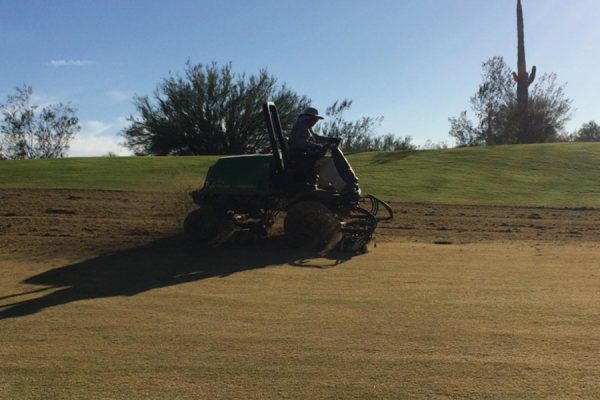 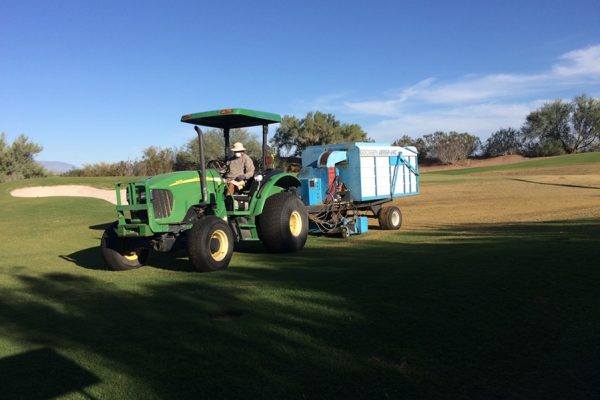 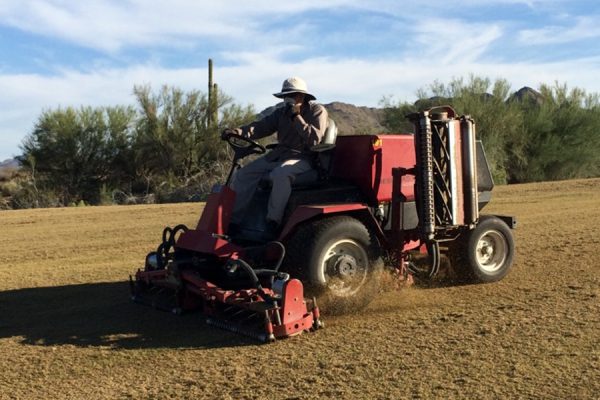 At We-Ko-Pa, we tackle this chore in October. 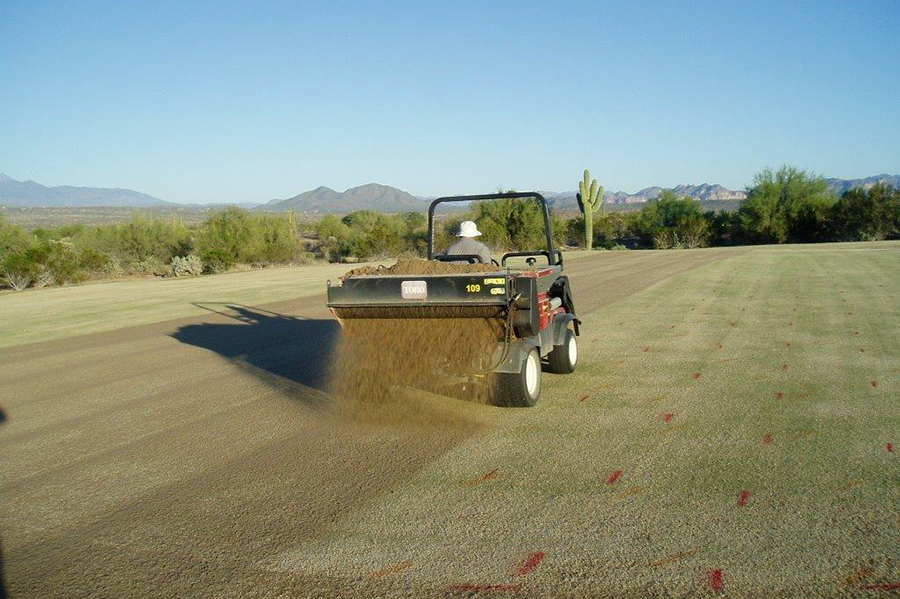 “We finish prepping and begin seeding the greens the first day we close. In the picture we are sand topdressing a green that has been seeded. The paint is used to mark our passes with the 3 foot drop seeder so we end up with an even application of seed. Two drop seeders are used to seed the greens going different directions with different colored paint. They each apply 6 lbs/1000 sq ft of Poa Trivialis for a total rate of 12 lbs./1000.” – Ryan Kreizenbeck, We-Ko-Pa Superintendent

Upon reopening, the conditions are a bit soggy due to the ramped up watering schedule needed to establish the new turf. As a result, it’s a good idea to play a tee box forward to compensate for the lack of roll due to the soft conditions. To protect the baby blades, golf carts must stay on the cart paths for several weeks after reopening. Unfortunately, there is no way around this inconvenience.

Good news is the rates following overseed are very reasonable. That goes for lodging at We-Ko-Pa Resort & Conference Center as well. And availability is usually open, essentially, until January when peak-season rates kick in and the number of visitors swells. Those who are not concerned about the cons listed above can find a ton of value during this timeframe. It’s also a great window of opportunity for those who typically play their rounds during the heat of the summer to get out for reasonable rates at reasonable temperatures.

Although it’s quite the undertaking to plant entirely new playing surfaces each year, the process allows golfers worldwide to experience the game at its best in one of the most picturesque Sonoran Desert locations on the planet.