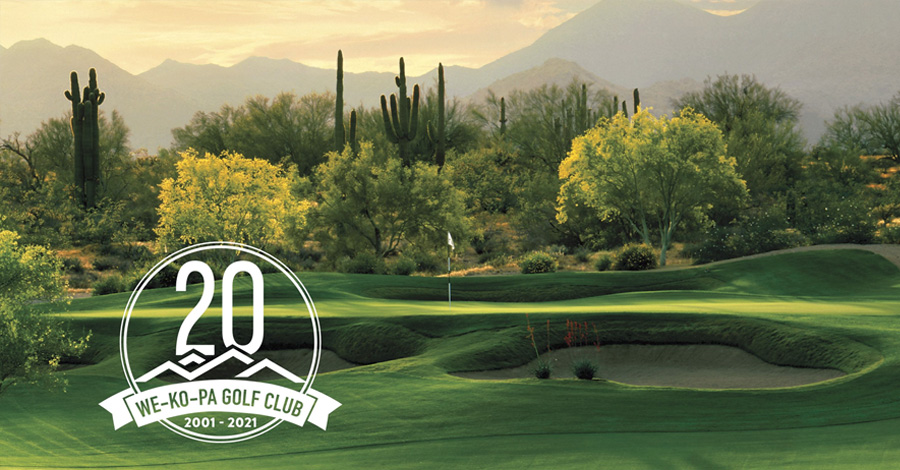 We-Ko-Pa Golf Club – Arizona’s Ultimate Golf Experience – is celebrating its 20th anniversary in 2022 with use of a new, limited-edition 20th anniversary logo. We-Ko-Pa officially opened in December 2001 with its Cholla course designed by Scott Miller. In 2006, We-Ko-Pa opened its second course, Saguaro, designed by Bill Coore and Ben Crenshaw. Together, the two courses are among the most awarded and recognized public golf courses in Arizona.

“We’re thrilled and extremely proud to celebrate 20 years as one of Arizona’s best golf properties,” said Matt Barr, general manager of We-Ko-Pa Golf Club. “We owe success over the past two decades not only to the extraordinary on-course golf experience, but also our tremendous staff, guest services, our vendors and partners, and – of course – the leaders of the Fort McDowell Yavapai Nation who have been our strongest advocates and supporters. We’re looking forward to another 20 years and beyond.”

We-Ko-Pa Golf Club officially opened its doors in December 2001 with the completion of its first course, Cholla, the handiwork of notable designer Scott Miller. Cholla’s traditional desert-style routing and playability was enhanced by the unique topography of the Sonoran Desert and quickly garnered praise from both players and golf media outlets alike. Cholla embodies some of architect Scott Miller’s favorite design philosophies like relatively large, traditional landing zones and easily identifiable hazards – all set in the untouched Sonoran Desert and free from roads, homes, business and accompanying noise.

Cholla’s early success set the stage for a second course at We-Ko-Pa Golf Club and in 2005, the Fort McDowell Yavapai Nation signed world-renowned golf course architect duo Bill Coore and Ben Crenshaw to design the Saguaro course which opened the following year. Saguaro has design elements not commonly found in the desert Southwest and has much in common with the older more traditional courses found on the east coast, where greens are close to tees and the course follows the natural movement of the land making walking easy and enjoyable. The majority of the greens are open in front to allow for run-up shots – uncommon for desert golf and the subtle pitch and roll of the terrain on the approach to the greens gives each hole much of its distinctive playing characteristics.

“We-Ko-Pa is unique in that the property features two award-winning courses with incredibly different designs,” said Barr. “Many 36-hole facilities feature the same designer or similar routing, layout and playability and that’s just not the case here. Players can play 36 holes at We-Ko-Pa and never see a similar hole twice. It’s one of our strongest and most defining characteristics.”

Each of We-Ko-Pa’s golf courses has earned numerous awards and accolades over the last 20 years starting with Cholla’s mention as a member of Sports Illustrated’s “10 Best New Public Courses in the world” in 2002. Since then, Saguaro has held the No. 1 spot in Golfweek’s “Best Courses You Can Play State-by-State Rankings” all but one year since opening and Cholla has held a Top-10 spot in the same rankings since 2007 and currently holds the No. 7 position. Other national golf publications like Golf Digest, LINKS and GOLF have showered praise on both Cholla and Saguaro. For a full list of We-Ko-Pa Golf Club’s awards and accolades, click here.