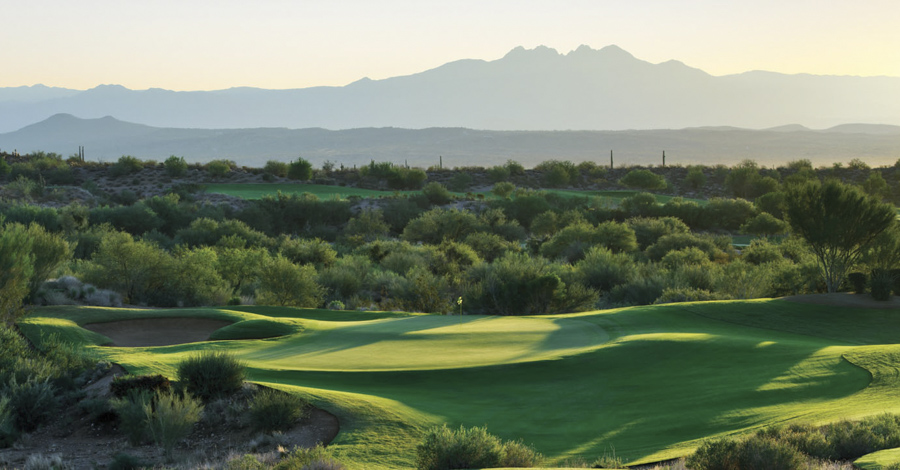 What’s in a Name? For We-Ko-Pa: a Mountain

If a person spent a day with outside service scrubbing clubs, they’d hear golfers rave about the exceptional golf course conditions and designs of Saguaro and Cholla. Rightfully so, both are highly regarded for exactly those reasons. They’d also hear about the incredible mountain views. The place is surrounded. And Four Peaks, by far, is biggest kid on the block.

In fact, this 7,000-foot elephant in the room is hard to miss from just about anywhere on the property, if not the entire Valley of the Sun. As one might imagine, it holds special meaning for the Fort McDowell Yavapai Nation. The word “We-Ko-Pa” is the Yavapai pronunciation for “Four Peaks Mountain.”

The highest of the four, Brown’s Peak, climbs to 7,657 feet. Boggles the mind to think someone standing at the top is eyeball-to-eyeball with someone in Flagstaff. What’s more, on a clear day, they can see Humphreys Peak 160 miles away, the highest point in Arizona at 12,633 feet.

Four Peaks not only reaches for the sky, it is home to a wide variety of plants and animals. Ponderosa pines at the higher elevations give way to nearly impenetrable thickets of manzanita and pinion pines on the way down. Below that, grasslands meet thriving Sonoran Desert, gigantic Saguaros and shady canyons dotted with cottonwoods and sycamores cast in between.

The Four Peaks wilderness is home to one of the densest black bear populations in Arizona, along with ring-tailed cats, skunks, coyotes, deer, javelinas, and mountain lions. The creepy-crawlies found there include rattlesnakes, scorpions, black widow spiders, centipedes and millipedes.

Four Peaks is a real stunner, to be sure, but the McDowell Mountains get most of the publicity. Every year the blimp has a field day during the Waste Management Phoenix Open panning TPC Scottsdale set against this iconic collection of saw-toothed ridges. If the pilot punched it over the top, they’d find We-Ko-Pa on the other side. A bit farther east and they’d fly over the mysterious Superstition Mountains where the fabled Lost Dutchman gold mine remains unclaimed despite a steady flow of dreamy treasure hunters searching for it for the last 125 years. Then there’s the rest of the greater Mazatzal Wilderness to the northeast. Encompassing more than 252,500 acres of the Tonto and Coconino national forests, it extends as far as the eye can see.

Most golfers bomb up Shea Boulevard on their way to We-Ko-Pa. Next time, pay attention at the top of the steep grade entering Fountain Hills. Just over the top is one of the most spectacular views in the state. One that accompanies every golfer during their round at We-Ko-Pa Golf Club.